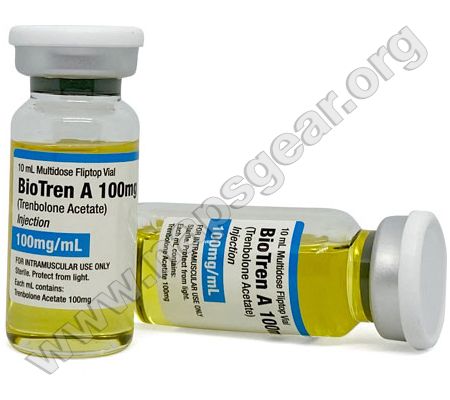 Biotren A 100 Biomex Steroid On Sale

BioTren A 100 is an injectable steroid containing 100 mg of the hormone Trenbolone Acetate per ml. The acetate ester is very fast acting, and bodybuilders often find that daily injections are best for keeping blood levels as consistent as possible. BioTren A 100 is the most powerful overall steroid in use by bodybuilders today, and produces very hard and defined muscles.

It was first used in the legendary steroid, Parabolan, and is also used in cattle implant pellets. Kits became widely available on the internet allowing bodybuilders to convert these pellets into injectable solution. Users of BioTren A 100 often report amazing gains in both strength and quality muscle mass, while the fat and water seems to "melt" off. To give one an idea of just how powerful this hormone is as a muscle builder, please note that the powerful steroid Testosterone has an anabolic rating of 100, while Trenbolone Acetate has a rating of 500! The drug is also a powerful fat burning aid, and lots of bodybuilders actually claim that the body will still drop bodyfat very quickly, even when one's diet isn't very clean. It is important to note that this substance will shut one's natural testosterone production down very quickly, thus making a proper PCT protocol a must upon conclusion of a cycle.