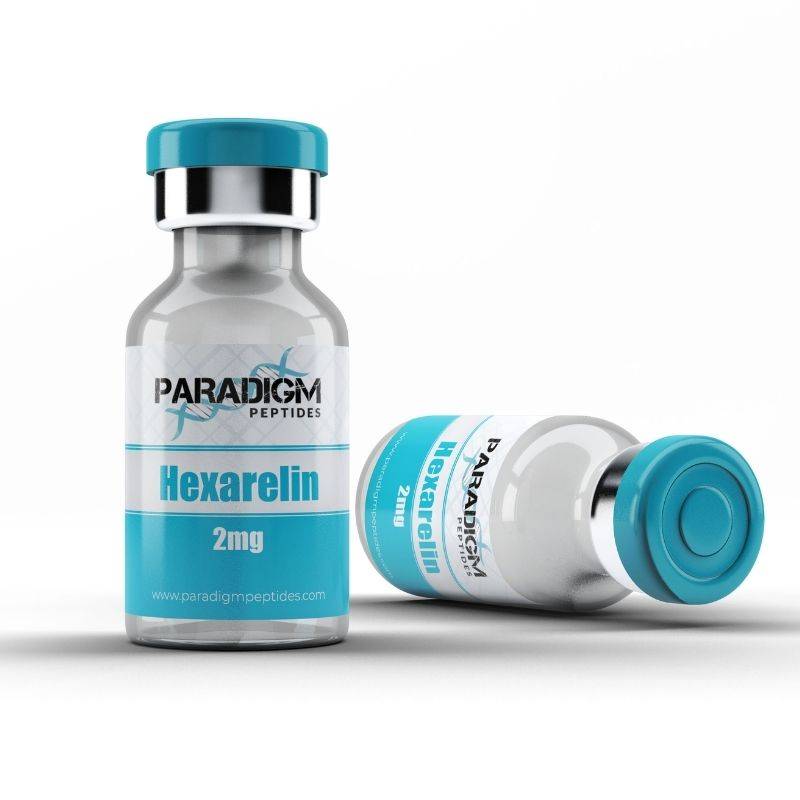 Hexarelin (HEX), also known as Examorelin, is a synthetic hexapeptide that affects growth hormone production in the body.

Hexarelin, also known as Examorelin, is a laboratory developed synthetic peptide which is designed to increase the plasma level of growth hormone in human beings. It precisely replicates a secretagogue receptor, known as a GHSR, of a hexapeptide classification, which is naturally produced by the pituitary gland which sits at the base of the human brain.

It works by powerfully stimulating the production of the natural human growth hormones when using only very small doses. Hexarelin was developed as a medical solution to congestive heart failure and human growth hormone deficiency. It is very fast acting, meaning that the results of using Hexarelin can be seen quickly.

Hexarelin, unlike the similar GHRP-6, does not result in increased appetite because unlike GHRP-6 it does not increase your Ghrelin level, which leads to feelings of hunger. It increases levels of (IGF-1) Insulin Like Growth Factor in the liver, and it is this which leads to the fat reduction and muscles growth typically experienced by users of Hexarelin.

Hexarelin stimulates the release of higher levels of Growth Hormone than GHRH, and leads to very high increases in levels of plasma GH, even at low doses.

Hexarelin should be taken for eight to twelve weeks. For the first four weeks, levels build up quickly in the body. Over the next eight weeks, gains are consolidated. After twelve weeks, little additional gain is noticed as the body begins to develop tolerance, and use should be discontinued after taking Hexarelin for sixteen weeks. A six week pause is ideal before beginning another course of Hexarelin, if desired.

Hexarelin acts as a booster to what your body does for you naturally. It is taken as a subcutaneous (under the skin) injection, and the recommended dose is 200 to 400 mg each day. There may not be a benefit in taking more than 200 mg, and of course, you should never exceed the maximum suggested dosage – more does not mean better in this case!
Some users have experienced minor water retention issues, but Hexarelin has not exhibited any of the negative side effects sometimes associated with steroids.

Hexarelin is frequently used to help athletes during periods of recovery from injury, especially relatively short term injury. It enables you to continue to burn fat and build muscle when perhaps your exercise regime has to be limited.
Hexarelin works best when combined with a good protein rich diet. Focus on grass fed meats and dairy, fish, organic vegetables such as sweet potato, broccoli and leafy greens, as well as a modest amount of fruit. Avoid carbohydrates and sugar. You should also ensure that you hydrate well using water, milk and modest amounts of natural fruit juices. You should also follow an appropriate exercise regime. This regime can be at a greatly reduced level from the one you are used to, for example during periods of recovery from injury. Users have found it useful to combine Hexarelin with other peptides.

Athletes and sports people using Hexarelin can expect to experience positive effects including:

While Hexarelin is not a pain reliever, because it aids and speeds up healing, pain from injuries can be reduced more quickly as a result.